Subscribe to my newsletter and never miss my upcoming articles

Listen to this article

In this blog, I will be showing how to implement Redis Task Queues in Flask and how to deploy it on Docker using compose.

First we need to understand what are Task Queues? Where do we use them?

According to Google Cloud,

Task queues let applications perform work, called tasks, asynchronously outside of a user request. If an app needs to execute work in the background, it adds tasks to task queues. The tasks are executed later, by worker services.

To put it simply Task queues remove the load of executing tasks (like sending mails, large calculations) from the webserver and are run independently on a background service called workers.

Imagine this scenario. You built a web application that sends greeting messages to provided email addresses. You are using the send_email(mail_id) method you built for sending an email that takes 5 seconds per email to send the greeting. Your application works great but there is one problem. Whenever someone sends the greeting they will have to wait for the server to process the previous request which takes seconds 5*(number of emails). This means you need to wait a while before you can use your application again.

You can fix this by implementing Task Queues. Where each call to send_email(mail_id) is a single task. You create a "Worker" that is independent of your Web Server and is responsible for executing the tasks. Now you can instantly access your web server without having to wait for the previous greeting to be sent. The greeting still takes 5 seconds each to send because you built a pretty bad function but you don't have to wait to use your web app each time you use it. If you decide to scale your application you can just add more workers instead of scaling your entire web application.

What is Redis and Redis Queue?

In simplest terms Redis is a service that stores key-value pairs in your RAM. It is widely used as a caching layer that stores the frequently accessed data from your database so you don't have to query your database too often (because it's slow and expensive) and directly read the data from cache memory.

Redis Queues is a python library implemented using Redis, it is used for queuing tasks and creating workers easily. You learn more about it on their official website. Note that a "Job" is the same as "Task" I use them interchangeably below.

In this blog, I am going to demonstrate a bare minimum implementation of Redis Queues using Flask.

Here is the directory tree that I am starting with:

First, let us install the libraries required. Spin up your virtual environment and install

Now that we have our tools handy, let's start building the application. For simplicity, I am going to create an application that fetches an image of a cat from an API, and to simulate the long response I am going to add an artificial delay. Let's look at our task function.

We will store this function in api.py in app/ directory. Now, Let's move on to the Flask app. This is going to be a fairly simple Flask application with two endpoints, One for queuing the tasks and another for fetching the task queues (and view result).

Configuring the Redis Queue and importing our api.py into the flask app.

Notice a couple of things here, I am importing the function from our api.py which we will use to queue the tasks and the Redis queue configuration. r = redis.Redis(host='redis', port=6379). here the host is actually the URL of your Redis server, if you're running Redis server on localhost then you need to change it to localhost but since we are using Docker we will instead use the name of our service as host, the default port for Redis is 6379 but if you changed it to something else then you will have to change it here.

Here, I am creating a new task and adding it to the queue whenever a request is made to the root URL (/). The getCatImage is a function for the task and 5 is the args for the function, this translates to getCatImage(5). In our function 5 is actually used to simulate 5 seconds delay.

I am also creating an Html component to show the number of queued tasks (jobs) and a link to each task (job), here the q.jobs actually stores all your tasks as objects in a list, hence we are iterating through q.jobs to get the id of each task (job).

Creating an endpoint to fetch a particular task based on id

To put it simply what is happening here is we are taking a parameter job_id and fetching its data like the result, status, start time, and end time from the queue. In the end, when the job is completed we are displaying the cat image that was fetched and the time the task finished executing. Apologies for the messy HTML but I did not want to create a template for this small application.

That's it! It is a very small application. Now it's time to Dockerize it.

If you don't know what is Docker I suggest you read my previous blog where I explain Containers, VMs, Docker, etc.

As you probably guessed we need multiple containers here, 3 to be specific

I am going to use Docker Compose which makes it really easy to deploy multiple containers at once.

Let's build the Dockerfile for the flask application first

It's plain and straightforward, Copy the app directory, Install requirements.txt and run the main.py using python. Note that this Dockerfile will be in app/.

Let us build the docker-compose.yml

This may not look like it but it's actually very plain and straightforward as well. Let's start from the beginning. We start by declaring our compose version which in this case is 3 then we directly move on to creating our services (containers). First is Redis, Just install the image redis:4.0.6-alpine from the hub, map the port 6379:6379, and mount the redis directory.

Second, flask-app. Here we are going to give a name to the image which is app-image because we are going to use it in our worker. Give the container a name. Build the Dockerfile from app/, map the ports 5000:5000 and mount the app/ volume.

Finally, We are going to create a container for a worker. Here we use the same image as flask-app because that's where rq is installed, next we link it to the redis container and make sure it starts after the redis container (because rq depends on redis-server) and run the command rq worker with args --url redis://redis:6379 which specifies our redis-server url

That's it, You have everything now. Here's how the final directory map looks like

and running the containers

You should be able to see your application live at localhost:5000. Reload it a couple of times so you can queue multiple tasks.

I refreshed it 11 times as you can see there are 11 Jobs queued. Let's click on one.

You can see this task has not started yet and is still pending, The status will change to started when this task starts executing. Let's reload it after a couple of seconds and see if it has finished running the task. 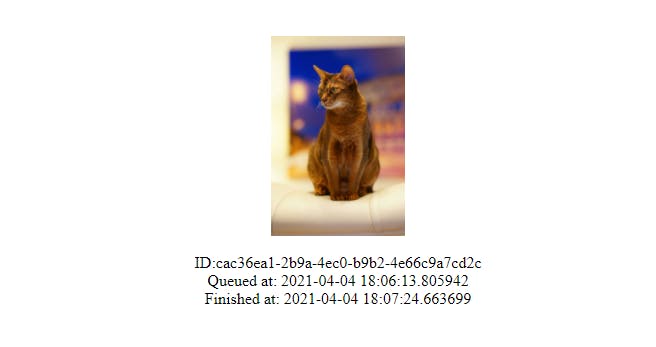 That's all! You just saw a bare minimum application implementing Redis queues and deploying them on Docker using compose.

In this blog, you learned about Task queues, Redis, Redis queues, how to implement Redis queues using Flask, and how to deploy them as multiple Docker containers using compose. All the code used above is available at:

For the next blog, I will be sharing one of my projects which is Tracking Stock Market Trends on Reddit where I used a combination of Reddit API, Yahoo Finance API, and some interesting NLP implementation to analyze Stocker Market Trends using Reddit.